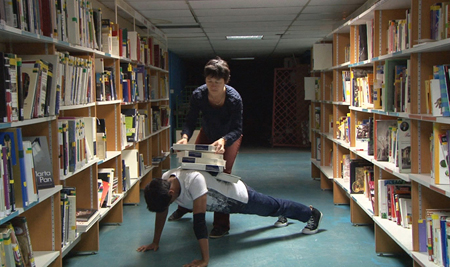 This residency is the continuation of a first workshop held in the same school in 2011-2012 with La Fabrique du Regard, a pedagogical progamme of the BAL.
In that workshop, the students considered the figure of the youth in the suburbs, based on research on the representations and discourses associated with it. This collective work resulted in the realization of a ten-minute split screen video installation, “CLICHE-US !”, in which the students staged themselves and questioned the mythological dimension of the youth figure, in appearance very clearly delineated.
During her residency in 2012-2013, Elise Leclercq Bérimont initiated, in collaboration with the students and the adults who accompanied them, a collective re-reading of the school’s internal functioning policy and various writings of Henri Wallon, psychologist and pedagogue, for whom the school is named.

The videos bring into play social relations and the movement between the individual and the educational community, allowing us to explore imaginary spaces that resist and question our relation to the real and to norms existing in the school environment.
A DVD of the totality of the videos made over the last two years, as well as a booklet written under the direction of the historian and art critic Morad Montazami, will be edited at the end of 2013.