Seance presented by Olivier Marboeuf in the presence of the director.
Free entry 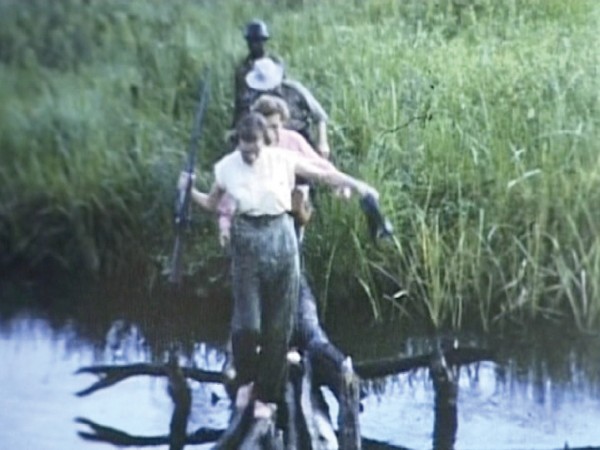 Synopsis
Obscure White Messenger
uses found home-movie footage to tell the story of Dimitrios Tsafendas, who assassinated the South African prime minister and ‘architect of apartheid’, HF Verwoerd, in 1966; it takes its title from a reference to Tsafendas in Nelson Mandela’s autobiography, Long Walk to Freedom. What drove Tsafendas, a man of mixed race, a migrant, working as a parliamentary messenger at the time, to commit this act? Siopis explores the intermingling of madness and political motive evident in transcripts of interviews with Tsafendas. Throughout the film there is the question of who the ‘illegitimate’ Tsafendas is and where he belongs; of what it means to be stateless in a world where citizenship all too often establishes and legitimates what it means to be fully human.

In Communion the story is about an Irish nun, Sister Aidan, who was also  medical doctor, Elsie Quinlan. She was murdered by a crowd of angry people in the Eastern Cape, who were protesting against apartheid laws during the Defiance Campaign in 1952 in South Africa. Many of the people in the crowd knew and loved Sister Aidan, but she was in the wrong place at the wrong time. In newspaper reports and scholarly articles, questions emerged about ‘common cause’ and culpability – which of the crowd committed the murder? Pathologists could not determine how she died, because parts of her body were missing, some allegedly eaten. Siopis situates Sister Aidan’s ‘voice’ (read as subtitles) in the first person: she narrates her own death, as if from the grave. Contingency is hooked to historical fact through Siopis’ selective use of text in combination with film sequences – anonymous home movies that do not connect in any way to the empirical facts of the story. The sound is an African lullaby.

In The Master is Drowning the artist extends her use of found film beyond home movies to historical documentary, combining private and public film sequences to create a story that is both fictive and ‘real’. The narrative unfolds chronologically, culminating in the attempted assassination of the South African Prime Minister HF Verwoerd by David Beresford Pratt, a white liberal businessman and farmer. The attempt occurred in 1960 on the eve of the inauguration of the apartheid South African Republic, and is depicted through the inclusion of actual news footage from that time. Pratt went to the annual Agricultural Show in Johannesburg and shot Verwoerd twice in the face at point blank range following his opening address. Miraculously, Verwoerd survived, and in the ensuing court process Pratt, who suffered from epilepsy, was declared unsound of mind. The words in the video are Pratt’s, drawn from different sources including transcripts of his trial and newspapers of the time.

Biography
Penny Siopis is a South African of Greek descent. She lives in Cape Town where she is an Honorary Professor at Michaelis School of Fine Art, University of Cape Town. Siopis works in painting, film/video, photography and installation. She has exhibited widely, in South Africa and internationally. She had a solo show, Three Essays on Shame, at the Freud Museum,London, in 2005. She has taken part in the biennales of Sydney, Johannesburg, Gwangju, Havana and Venice.