Op-Film: An Archaeology of Optics

Khiasma presents Op-Film: An Archaeology of Optics, a joint exhibition by artists and filmmakers Filipa César and Louis Henderson.

The exhibition comprises a film and installation based on ongoing research that explores how optical technologies of military and colonial design – from lighthouse Fresnel lenses to global satellite navigation systems – both inform and are informed by Western models of knowledge. Taking a critical approach to the ideologies behind the development of these instruments of guidance and surveillance, the artists consider how imperial gestures of discovery, revelation and possession are embedded in associations between seeing and understanding, light projection and enlightenment.

The film tracks Fresnel lenses from their site of production to their exhibition in a museum of lighthouses and navigational devices. It also examines the diverse social contexts in which optics are implicated, contrasting the system of triangular trade that followed the first European arrivals in the ‘New World’ with the political potential seen in Op art in post-revolutionary Cuba. Incorporating 16mm celluloid images, digital desktop captures and 3D CGI, the film also maps a technological trajectory: from historical methods of optical navigation to new algorithms of locating, from singular projection to multi-perspectival satellitic visions. Registering these technical advances progressively through their film’s materials and means of production, the artists develop what they describe as “a cinema of affect, a cinema of experience – an Op-Film.”

Alongside this work, an installation collages together key documentary materials that underpin their research to date, including archi val images, oceanic charts, lighthouse blueprints, lights and fragments of Fresnel lenses. After Contour Biennial in March 2017, the installation travelled to Gasworks (London) in Spring and then onto Temporary Gallery (Cologne) in the Fall of 2017. The exhibition is thought of as a platform for ongoing research by both artists, and creates in each context public events, screenings and conversations that extend the exhibition. As a final step, the « Black Lens » seminar at La Colonie will accompany the installation’s presentation at Khiasma. 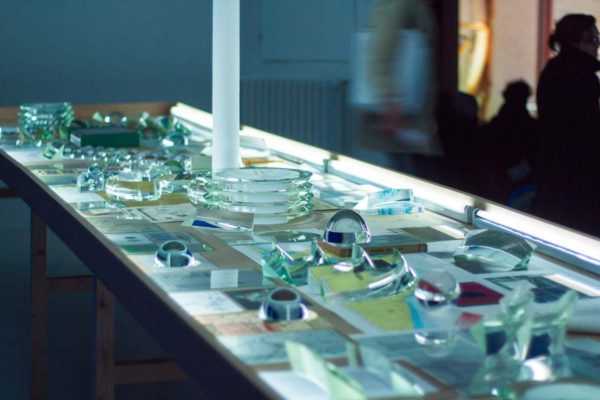 Interview with Filipa César and Louis Henderson, on the occasion of the « Op-Film » exhibition at Gasworks, London.

The opening week of the exhibition is an opportunity to present a rich programme of events around the work of Filipa César and Louis Henderson in a range of venues around Paris.
Monday 26th March at 7pm the Delegation in France of the Calouste Gulbenkian Foundation will be putting on a meet with avec Filipa César and Louis Henderson around the issues at stake in the “Op-Film: An Archaeology of optics” exhibition.
Tuesday 27th March at 8.30pm at the Pompidou Centre, Filipa César will be presenting a special viewing of her feature-film Spell Reel as part of the festival Cinéma du Réel.
Wednesday 28th March at 6.30pm, the exhibition “Op-Film: An Archaeology of optics” opens at Khiasma.
Thursday 29th March, from 10am till 6pm at La Colonie, the first day of Black Lens -an experimental seminar on the moving image, organised by Khiasma as an echo of the exhibition – will take place.
Thursday 29th March at 8pm at MK2 Beaubourg, Filipa César and Louis Henderson will present their film Sunstone, the film at heart of the exhibition « Op-film », alongside members of The Otolith Group, who will present their film The Third Part of the Third Measure.
Friday 30th March, from 10am to 6pm at La Colonie, the second day of the seminar Black Lens, will take place.
Friday evening, the participants of the Black Lens seminar along with the Khiasma and Spectre Production (co-producer of the seminar) invite you to join them on the first floor of La Colonie for a festive evening.