Launch of Till Roeskens’ next book, to be published by Al Dante

As the festival RELECTURES wanted to celebrate the October launch of À propos de quelques points dans l’espace (Concerning a few points in space), to be published by Al Dante Editions, Till Roeskens has proposed to review twenty-five years of journeys, explorations and encounters with us. And to do so in the style of the book—part autobiography, part adventure story, part manifesto and part reasoned catalog—which proposes an assemblage of traces, images and testimonial.

“I’d like to try to connect the different points of the terrestrial surface that I have come to know, the way you’d attach thread between little flags on a map. Fragments of a possible map of my life, crossed by other lives, assembled here not in order to find me, but to understand where I am—to set off anew from there. I’d like to share this bit of the road with you.”

To close the evening, Till Roeskens reactivates his 2002 performance, Till R. raconte ses voyages et ceux des autres (Till R relates his journeys and those of others), a “conference-slide show in the tradition of a traveler returning from a long trip. But the trip in question turned out to mean taking other people’s trips. Non-stop hitchhiking, for two days and a night, with no predetermined direction. Follow each person who picks you up to his/her destination. Continue on, straight ahead.” 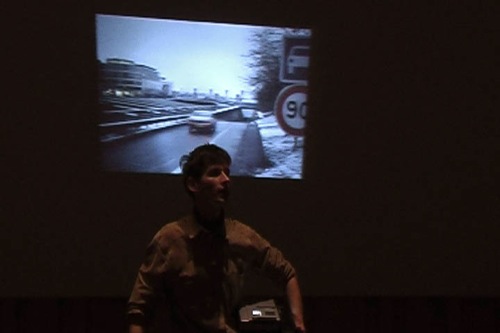 An amateur of applied geography, Till Roeskens belongs to the family of artist-explorers. His work is developed in the meeting with a given territory and those who try to trace their paths there. What he brings back from his wanderings, whether it’s in the form of a book, a video film, or a conference-slide show, comprises an invitation to the exercise of observation, a questioning on what it is possible to grasp of the infinite complexity of the world.