Terror is a thriller which unrolls over a period of fifty years, a time when both European individuals and decision-makers, from Hénin-Beaumont to Marbella and from Linas-Monthléry to Treblinka, will be confronted with new modes for life and, for some, with the unconventional methods of the LIFE enterprise. Founded in 2014, in a few short years this enterprise will revolutionize the depression market with a new generation of molecules. 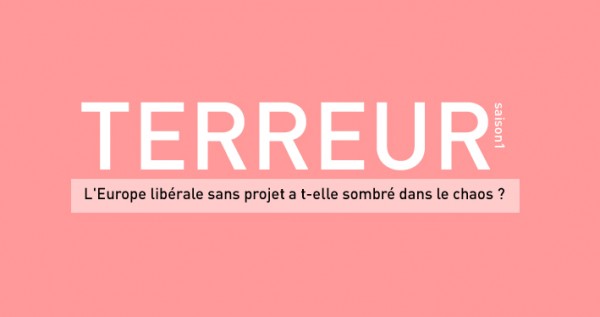 “Over the course of a very special week, all over Europe individuals did not take advantage of promotions on incredible products, they did not buy disposable goods and thought that loving one’s bank was maybe a bit too much. Individuals did not make appointments for cosmetic treatments, did not think that an opportunity could be attained by a ‘like’, did not procure more foods precooked by machines. These individuals, who became more and more numerous over the course of this very exceptional week in a rather exceptional Europe, did not try to explain their behavior, they were neither organized nor federated nor were they boycotting. During these seven days individuals, unorganized in the matter of boycotting, responded to a different sort of compulsion to buy, from Alfortville to Possenhofen, from Capri to Malmö. Their compulsions, their tastes, their habits, their behavior all changed. They felt very good. During these one hundred and sixty-eight hours, individuals did not acquire products through telemarketing, did not procure tee-shirts with kittens on them or with skulls and crossbones, they did not plan evenings watching TV programs that conveyed the idea of the end of everything. They were no longer machines, they were no longer susceptible to being ‘liked’, they were no longer disposable, an enormous instant and unconscious decoding. These individuals, in the midst of trauma but supporting it well during these one hundred and sixty-eight hours, no longer considered that a steam iron could revolutionize their vision of housekeeping, or that a set of sixteen pots and pans could transform their very basic culinary skills, in the morning they did not apply any chemical products in their bathrooms for fifteen minutes, they did not stare at passers-by in the street, thinking ‘asshole’ or ‘pig’. Instead, they smiled. They felt really good…”