Homère Homer plays at Greek comedy as a way to recount the subprime crisis. The tale is ineluctable : Homer (the one who eats donuts) must confront the economic crisis. Once his house is confiscated and his family traumatized, he ends up putting out his eyes in order not to see his unhappiness. After a long period of wandering, searching for his daughter Lisa, he becomes Homère (the teller of tales). Alternating (really) tragic overacted sequences and (falsely) improvised economic explanations, Homère Homer provokes laughter, as well as a real comprehension of contemporary economic mechanisms. 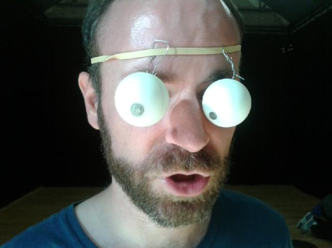 Alexis Fichet is an author, director and sometimes actor. In tandem with his stage work, Alexis Fichet develops projects closer to the visual arts, proposing ‘inhabited’ installations, within which performances unfold. In 2013, he received a grant from the CNL for the writing of Townstadt (working title), to be produced in 2016.

Nicolas Richard writes for the theater. In parallel, part of his work leads him to the writing of poetic texts performed in public. The author experiments and stages different forms of oral poetry, where the text finds its resolution in its oral execution.