Performance-documentary of a speech never made

With the participation of David Legrand

In the presence of Françoise Vergès and Mathieu K. Abonnenc

A brilliant mass whistled past my left ear, struck the ground violently and fell at my feet. I picked it up, lifted it above my head and continued the speech. It was a weapon I never saw again: a piece of wood, forty centimeters long, in which an enormous nail was planted perpendicularly. A few more arrived. If they had come closer it would have been easy for the people who threw the wood to hit me.

Examining a speech not made by André Malraux in Cayenne, Pierre Michelon focuses on a signature episode in the history of the departmentalization of French Guyana : the September 1958 referendum, on the Constitution of the 5th Republic. A small piece of wood considers this account in all its many versions : according to the Independents, the Communists, the Gaullists, the ministers, or all versions at once. This is the case with Jean Mariema, an important figure in Guyanese militancy, with whom Pierre Michelon constructs this model for a film.

Do you approve of the Constitution proposed by the Government of the Republic ? Question left unanswered, or constantly beleaguered by the Guyanese struggles that continue in the present : economic isolation, social cohesion, official or clandestine plundering… This Phantom Monday will be the occasion for a presentation of this ongoing project that posits a sensitized approach to historical investigation, between documentary and fable. 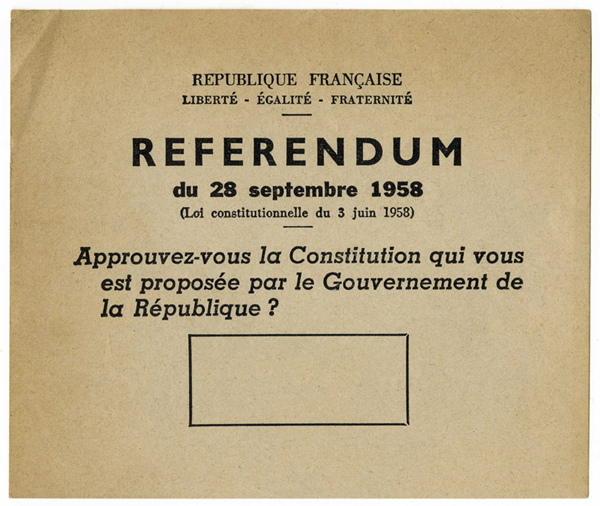 Pierre Michelon was born in Nantes in 1984. He studied at the Ecole Supérieure Nationale d’Art in Nice (La Villa Arson) and the Ecole Supérieure des Beaux-Arts in Nantes. His works were presented at the Foyer des Jeunes Travailleurs Océane (2014, St Herblain), the Villa Croce, the Museo d’Arte Contemporanea (2013, Genoa), at the Friche Belle de Mai (2013, Marseille) and the Restaurant Municipal Pierre Landais (2012, Nantes).

As a participating observer, Pierre Michelon explores the terrains of a forgetful society, His reflection, concentrated on historical research and in particular colonial history, is conjugated in a variety of propositions : translations, films, installations and performances. Each of these propositions is constructed around a process of research, taking the form of investigations, interviews, unexpected turns and associations. In the inconclusiveness of these bits of films, voices are superposed and knots appear : collisions between history and the present. With the words and gestures of those who remember, he collects proof and chooses a past.

Currently he is working on the film projects Vanmélé and A small piece of wood, with the support of the Fabrique Phantom.

David Legrand is an agitator. Over the last twenty years he has upset ideas and collective practices, perturbed schools and rules, reactivated freshness and insurrectional practices in the tradition of the avant-garde. His physical engagement is total, whether as inspired actor in performances or instigator of boundary-crossing filmic experimentation. He began his artistic activities with Fabrice Cotinat and Henrique Martins-Duarte and their galerie du cartable. Since then he has worked frenetically with a number of singular artists, such as Rainier Lericolais, Michel Aubry, Philippe Zunino, Michel Giroud, Chus Martinez, Joseph Morder and Boris Lehman. He has always been passionate for demanding engagement in extraordinary contexts, whether with the interventionist galerie du cartable, the epic fictive dialogues of the indéboulonnables de l’art, or the experimental programs of alternative and tactile medias, such as the recent platform Videa Performing Art, which he coordinated for the most recent international Bandits-Mages Encounters.