For her first Lundi de Phantom at Espace Khiasma, artist and cineaste Alex Reynolds, in conversation with the curator Anna Manubens, will trace the paths that lead her to her most recent film pieces: Ver Nieve, Esta puerta and esta ventana… to the writing of her first feature-length film Eiqui Chegan Os Meus Amores. Together they will discuss cinema as a space to inhabit, fiction as a strategy of power, story telling as a means of survival, the multiple negotiations of memory and the affects in the sharing of space. To sum up, the house will be a multi-bodied spoken story.

Like every Lundi de Phantom, the evening will open with a communal meal to which everyone is invited to contribute to and enjoy – a dish or anything to share. Drinks will be on sale, in support of R22 Tout-Monde, a collective web-radio initiated by Espace Khiasma and a sound memory of the Lundi de Phantoms. 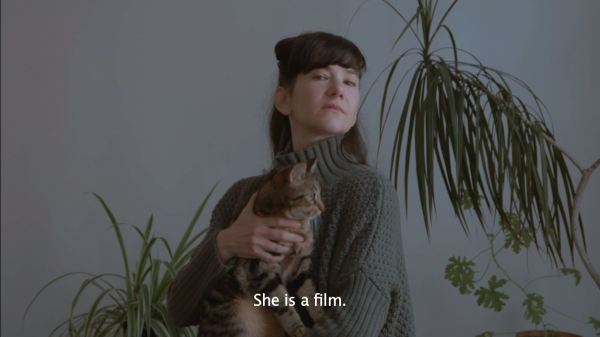 Alex Reynolds (Bilbao, 1978) is a “cinéphile” artist or an “artphile” director. With this mixture of obsessions and caprices that often trouble “philes”, her artistic practices are a meticulous examination of the cinematic device in a process that could be summed up as a “perverse dissection with love.” “Dissection” because her works isolate and examine the traits of audio-visual language. “Perverse” because these traits – these isolated characteristics – are executed in unusual manners (in the form of performance, texts, sound pieces and short audio-visual productions) which distance them from their habitual functions of film as a spiral. And “with love” because for Alex Reynolds cinema is not just an object of study but above all an object of desire.

Anna Manubens is a curator, writer and independent producer, with a preference for hybrid roles at the intersection of research, programing, development of community projects and exhibition direction. Previous director of audiences and publics at CAPC the Bordeaux Contemporary Arts Museum. From 2013 to 2016, she collaborated with Auguste Orts, the artist association dedicated to the production and animation of discussion around artist’s films. In parallel, she taught at Pompeu Fabra University (Barcelona) and developed a number of curatorial projects, the most recent of which “When you Fall Into a Trance (La Loge, Brussels, 2014) Moving Image Contours, commissariat directed with Soledad Gutiérrez (Tabakalera, San Sebastián, 2015), Hacer cuerpo con la máquina: Joachim Koester (Blue Project Foundation, Barcelona, 2016), et Visceral Blue (La Capella; Barcelona, 2016). She was the artistic director of the 2011 and 2012 editions of LOOP festival (Barcelona).

Launched in January 2013, Lundi de Phantom has imposed itself as a singular rendezvous, based on public presentations of on-going artistic research. A time for discussion, discovery and experimentation, Lundi de Phantom offers an insight into the activities of the artists associated with the Fabrique Phantom — a new tool dedicated to the development of contemporary film practices: an animated site for research and collaboration, a community bringing together professionals and the public, adapting itself to the specificities of each project.

If possible, please confirm your attendance in advance by writing to resa@khiasma.net or by telephone +331 43 60 69 72.