The Voyage Out (with Nuno da Luz)

This is a year of many moons, out there the carcasses of old factories now form an earthbed for beings growing from the mutant juice of pollutant force. Despite the radioactivity and the high temperatures, these new beings thrive. Fields of new born flowers, small gatherings of surviving bees, resistant plant species and new types of egg lay upon our shore, engaging us to dig and search for the meaning of such unexpected life. Hundreds of years have passed since the birth of the isle. With the coming of the Great Wave, all of our communication satellites, tools and pads broke down and now what we have left is touch and some remnants of utensils that we make do with. We are working on re-connecting with the tips of our fingers, learning to touch again, away from the touch operating systems and now directly onto the bodies, objects and surfaces that we seek to commute with. Touch is what allows us to understand, and yet only partially as we must be in constant motion in order to better see, feel, commune. Or as the Igbo proverb teaches us: on ne reste pas au même endroit pour regarder une danse des masques.

A couple of years after the toxic disaster in Fukushima, a new island emerges near the archipelago of Ogasawara in the pacific south of Japan. Whilst the region around the toxic plant in Fukushima threatens to become a contaminated isle, the new island of Nishinoshima prepares itself to receive its very first scientific expedition. The Voyage Out plots speculative bridges between these two parallel worlds, the ‘beginning’ of a world face to the ‘end’ of another. The Voyage Out will be presented at Les Lundis de Phantom, as an expanded tapestry of sounds and images, ghosts that populate the very first stages of this film in the making . The evening will be a cinematic expansion, a conversation that tongues a nascent language – amazing fantasy. 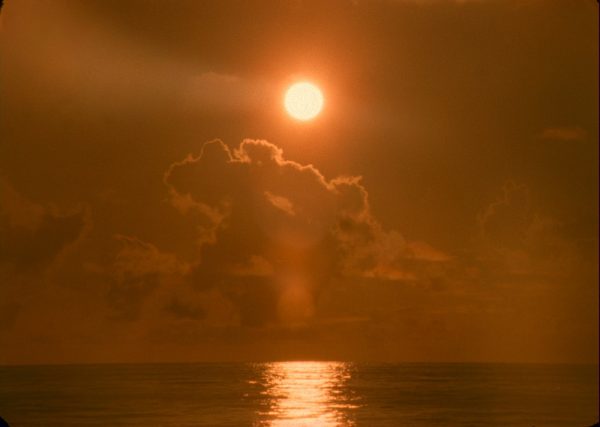 Ana Vaz (b. 1986, Brasília) is an artist and filmmaker whose films and other expanded works speculate upon the relationships between self and other, myth and history through a cosmology of signs, references and perspectives. Assemblages of found and shot materials, her films combine ethnography and speculation in exploring the frictions and fictions imprinted upon both natural and built environments and its multiple inhabitants. A graduate from the Royal Melbourne Institute of Technology and Le Fresnoy – Studio National des Arts Contemporains, Ana was also a member of SPEAP (SciencesPo School of Political Arts), a project conceived and directed by Bruno Latour. Recent screenings of her work include the New York Film Festival – Projections, TIFF Wavelenghts, CPH:DOX, Videobrasil, Courtisane, Cinéma du Réel and Lux Salon. In 2015, she was the recipient of the Kazuko Trust Award presented by the Film Society of Lincoln Center in recognition of artistic excellence and innovation in her moving-image work.