Frédéric Nauczyciel is in residence for two years in Seine-Saint-Denis, invited by the department’s office of visual arts and dance.
For this Lundi de Phantom he will present recent videos and works in progress made in both the Paris region and Baltimore, concerning the world and vocabulary of contemporary voguing, a performance art that plays with and displaces genre.
“This residency continues my work in the Black ghettos of Baltimore. It presents the second (and Parisian) season of ‘The Fire Flies’ series. After documenting contemporary voguing and my encounters with Baltimore and Parisian voguers, this second season unfolds in Seine-Saint-Denis. It presents American and French figures in a reinvented periphery. New protagonists, artists and performers, will confront a ‘trans-gender’ geography. We’ll discover shared territories and the feminine presence in the city. A living, vibrant presence, de-centered and then recentered, baroque. Images, whether still, animated or live, in their aesthetics and ethics—in their form and essence—resonate with the words of George Didi-Huberman, which have accompanied me for more than three years now: ‘Experience has fallen, but it is up to us, in each specific situation, to raise this fall to dignity, to the ‘new beauty’ of a choreography, an invention of forms.’

House of HMU, films
House of HMU is a conceptual house, which moves voguing into art space. Films made during a residency at the Pompidou Center in 2013. 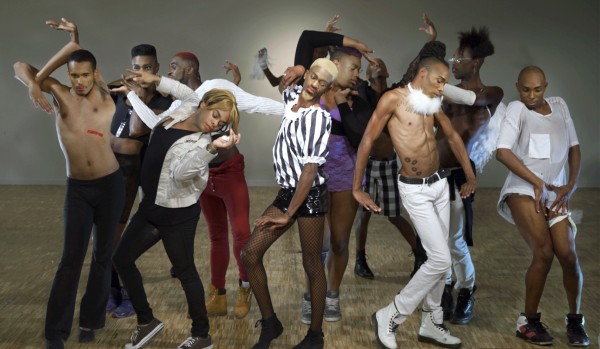 “A Baroque Ball” unites 14 performers. The rules of voguing are applied to dueling duos, set to a baroque interpretation of a Bach concerto. I introduce the notion of the court, politics and the constrained liberty of the baroque. The costumes and makeup are expressly unfinished. One version is sophisticated, with the voguers trying to respond to the installation. In the second version, which is conceived of as a joke, purity is lost but energy is gained, the energy of “shade”, that particular way of reprimanding the other while establishing complicity with the rest of the audience, one’s peers. The first version is savant, the second, shade. The two versions are presented one after the other. In my urban view, the specific quality of voguing is to renew itself by coming in contact with contemporary exterior elements, a capacity which is in part responsible for the longevity of this form of performance. It is central to the film “A Baroque Ball”.

“M. Against the World” considers the question of regard and narcissism in a three-way game of observation. The commentators watch and support the performer, while the performer addresses the observer via the camera. It is as much a matter of deconstructing the narcissism of the performer as questioning the position of the observer, faced with a dance whose origins come from striptease clubs. Constraints are weighty: the camera’s views, the framing of shots, and the imposed figures all serve to give structure to improvisation.

“Skin” lies at the crossroads of film, photography and dance. The protagonists film their tattoos – a semantic poem, skin deep urban writing, a journey into their intimate territories: choreographed selfies as a way to avoid the amazed regard and transcend narcissism. Photography in movement and visual dance: movement is choreographed facing the camera and each film becomes a danced solo.