During this Phantom screening, the Portuguese artist Filipa César will present two of her recent films: Mined Soil (2014) and Transmissions from the Liberated Zones (2015). Screening followed by a conversation with Filipa César and Olivier Marboeuf, producer of both films. 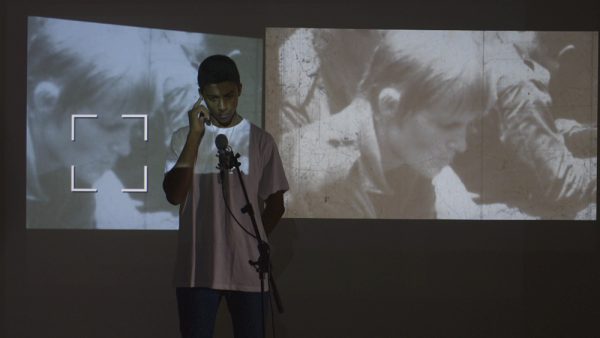 Transmissions from the Liberated Zones (2015)

The film-essay Mined Soil revisits the work of the Guinean agronomist Amílcar Cabral, studying in the 50’s the erosion of soil in the Portuguese Alentejo region through to his engagement as one of the leaders of the African Liberation Movement. This line of thoughts intertwines a documentation on an experimental gold mining site, operated today by a Canadian company and located in the same Portuguese area once studied by Cabral. The reading of the essay explores the space, surfaces and textures of the images, proposing past and present definitions of soil as a repository of memory, trace, exploitation, crisis, arsenal, treasure and palimpsest.

Transmission from the Liberated Zones, is an experiment bringing together statements and documents accessed and presented by a young boy through a low-fidelity feedback channel – a resonance studio to wander back and forth through time and subjects, between tepid and tropic encounters. This essay departs from the concept of Liberated Zones, a designation used to describe areas freed from Portuguese domination, organised and managed by the guerrilla militants of the PAIGC in Guinea, during the 11-year liberation war 1963-74. The Swedish protagonists are diplomate Folker Löfgren, filmmaker Lennart Malmer, filmmaker and psychologist Ingela Romare and politician Birgitta Dahl, all of them visited the zones in the early 1970s. The contemporary presenter reflects his own condition and states that recalling instances of liberation prepares the ground for further recurrences.