“What is a cité? A sum of names of places and names of people, friendships and loves, social adventures, exploited workers, successes that warm the heart, disappointments and ink on the walls, ravaging angers, kids who dance in neon light, little barbecues Sundays at one, sunny rooftops with chaises longues, traffic circles with the blazon of the town drawn in flowers, accelerations in ATV quads (straight to the finish line), heady refrains, erotic dramas, terrible drownings, the Cités are life, to the max. It is all of this that must be rendered, through invention, energy, the multitude of voices and sounds, presences. To create an ephemeral Cité, the space of one night, filled with stories and passions. To live in the language.” (Charles Robinson)

Dans les Cités is a novelistic fresco, running some 1300 pages, begun with the publication of Dans les Cités (collection Fiction & Cie, éditions du Seuil, 2011) and which will continue with Fabrication de la guerre civile (éditions du Seuil, 2016). These two novels by Charles Robinson explore a fictional Cité, la Cité des Pigeonniers, in a new town in the Parisian suburbs, at the moment when the Cité is about to be demolished and its inhabitants dispersed.

For the Nuit Blanche, Dans les Cités sets up an installation for the night in the Saint-Bernard church in the Goutte-d’Or neighborhood: a nocturnal râga.

A Râga is a structure conceived of to create an emotional climate, related to a moment of day or a season. Charles Robinson uses this conception of a râga to create a night-long reading, with 2 voices, 3 musicians (two guitars and a percussive ensemble), 20 chapters of the cycle specially rewritten, 50 characters.

Dans les Cités—râga nocturne is a mental visit, a succession of stories and encounters, which invites you to stop for a moment, during the long walks which characterize the Nuit Blanche, and listen to the reading and walk through the church, while three scribes transcribe the text live. 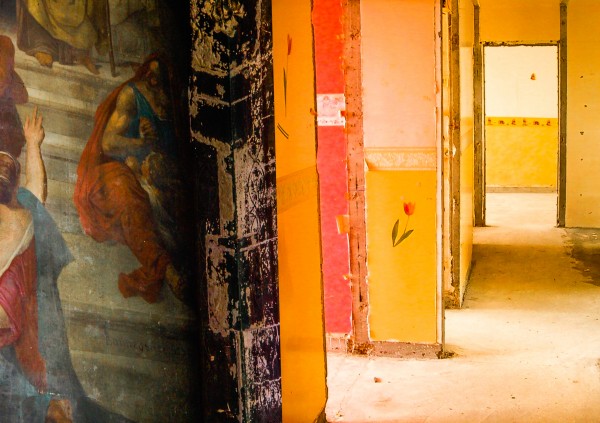 Charles Robinson—“A novelist, I am passionate about books. Yet I wanted to find a possibility for the text to go beyond mere publication. It could be a recording: Dans les Cités, for example, which became a sound piece for France Culture Radio, or Quand je pense à toi tu ris je ris aussi, a text which also became a sound piece at the Domaine de Chamarande. Dans les cités, a novel, has also served as the matrix for regular public readings since 2011, created with electronic soundtrack and video. Short forms are published and then rewritten to be read on stage with a visual installation, as for ils grouillent dans nos pensées ils ont faim, intended for a collective volume published by éditions Inculte (2014), reinvented in the form of a reading-performance, then converted in the mixed form text-image, with photographs of the performance. Writing is a textural lava, full of potential, it is turbulent and inspires diverse forms, which it fills: book, book-object, live, sound piece, installation, e-book, etc. Each of these variants of the text test the original resistance and pertinence, but push the text toward new registers.”
Upcoming book: Fabrication de la guerre civile, éditions du Seuil, collection Fiction & Cie., January 2016.

http://charles-robinson.blogspot.fr/
Violette Pouzet-Roussel is an actress. She works in theater and performs readings of contemporary texts, mobilizing voice, sounds and incarnation. She also practices a work on corporal metamorphosis, which passes by way of buto or the becoming-animal.
Lena Circus is a jazz trio, made up of two guitars and percussion, practicing a free jazz writing style. Here, music is event. The writing is very close to contemporary music. The sound field is the site of micro-interventions inhabiting a spacious, sinuous, undulating arena, where each musician intensifies his interventions. The music is hypnotic, forcing attention toward a jubilant aural tension, where objects of sound sparkle and irradiate. Imagine a landscape is planted. A tree. Branches with prolonged ramifications. Uncountable leaves. A river. The sky. Clouds. The temporality of this music passes through the elements of the landscape in an improvised mirroring, where everything moves, and is moved, where endlessly new sound events occur, in the same way that the landscape is inhabited. In this way, a piece performed by Lena Circus is a matrix of phenomena in time and space. Reverberation of a guitar. Chord whistling under the bow. Breaths. Cries. Frizzing of cymbals.
Nicolas Moulin / Antoine Letellier / Guillaume Arbonville : electric guitars, wind instruments, percussions
https://lenacircus.bandcamp.com/
http://www.lenacircus.com/