“Over the last ten years, I have interrogated the signification of the word ‘contemporary’, especially in the field of representations where the term is controversial. Over the past decade, I have noticed the line between artistic practices and forms of knowledge become increasingly blurred. This indistinction between inside and outside, individual and collective, centres and fringes, is what defines the contemporary, overthrowing traditional hierarchies in favour of horizontal relationships. Does putting this in written suffice? Certainly not. Brouhaha tackles the question of books and of the literary but it does so in the context of a global publication regime. The Brouhaha evenings (18th February at the Maison de la Poésie, 19th February at Espace Khiasma) will revive this experience through a performance of the book, alongside those who accompanied it over the years: writers, theorists, artists, curators, performers and students.” (Lionel Ruffel) 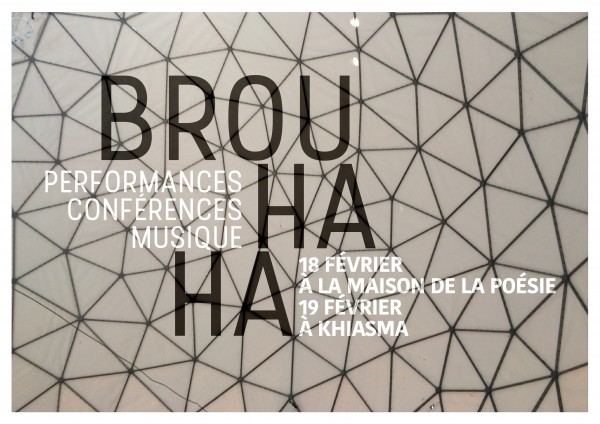 Evenings organised by the école de littérature, with the support of the Institut Universitaire de France and in partnership with the programme « Temps des écrivains à l’Université » at the Maison des écrivains et de la littérature.