Alien(s)kin: Queer other Other Lands of Here

Alien(s)kin: Queer other Other Lands of Here is an audio visual poetical performance that  that speaks to  the queer POC’s (person of colour)  agency from the so called margins as disrupters of dominant narratives and chrono-geographies.   For ever transversing borders, frontiers ,with an eye on “space” as the place to realise create and recreate alternative zones in time/space — Zones where alternative narratives breath  and seed  transitory geographies 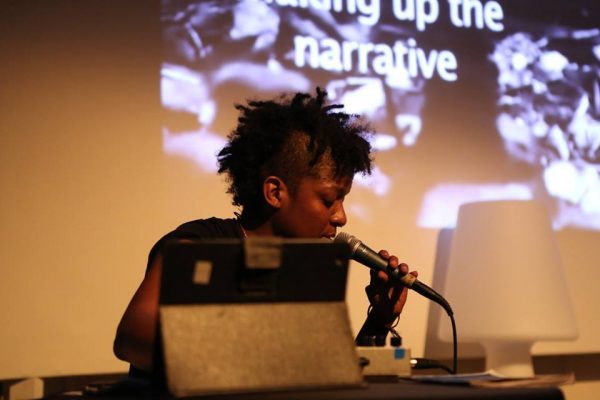 A disciple of the creative, I am inter-disciplinary artist who works with different mediums independently, but also in multiple fusions- incorporating written and spoken text, sound/music, and visuals. A nomad, I grew up in america but have lived for years in europe, including England, and France. During travels (including countries in Africa) I have met and collaborated with other artists, academics, who challenge ‘frontiers’ (external borders as well as internalised) and are planting seeds. A science fiction nerd, I have always looked at ‘space’ as a place to realise and talk about possible futures. My publications and performances have been diverse. They include a series of audio-visual anti-lectures which explore memory, and nomadic subjectivity through a “afrofuturist” lens. As I roam I have had the good fortune to perform, record, tour , publish and exhibit/ screen my work in Vienna, London, Berlin, South Africa, Senegal, Kampala, Paris…