A « carte blanche » offered to Frank Smith, as part of his residency “Writers in Seine-Saint-Denis” at Khiasma and the Archives nationales. A proposition initiated by the department of Seine-Saint-Denis.

The festival Hors limites unites with Espace Khiasma and the Archives nationales to welcome one of the ‘cartes blanches’ that punctuates the writing residency of Franck Smith. Greatly marked, like many people, by Jacques-Henri Michot’s Un ABC de la barbarie, Smith has invited the author to give a reading, on the occasion of the reissue of the work with éditions Al Dante.

A mapping of the cliches and commonplaces that characterize journalistic language, a miscellaneous collection of the words of artists and writers who recharge language so as to recount the world, the account of the writing and tribulations concerning a manuscript that finds its place in the great novelistic tradition of Quixote; the richness and critical scope of this text have made it an essential tool for whoever wants to resist the propagandist impact of the media on our manner of formulating the real. In manifest echo with the idea of a “democratic language” developed by Frank Smith in Political choruses, dramatic poem for voice, the exchange that follows will be nourished by passionate ideas on the (politically) “correct usage” of the faculty of speech! 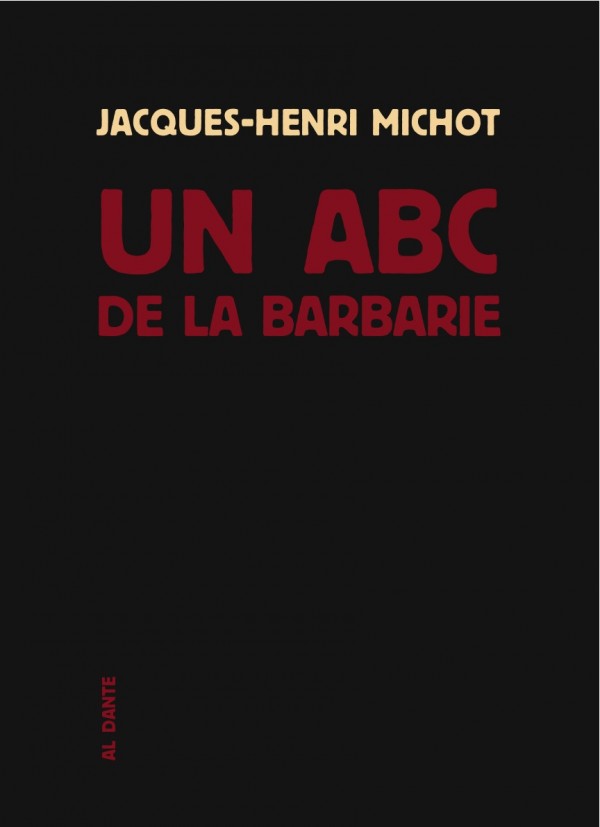 Born in 1935 the same day as Bataille, Breton and a few others founded the group Contre-attaque—a coincidence that rather pleases him. Former professor of comparative literature, history of jazz and, for a time, theater—most notably Brechtian—at the Université de Lille III. He will always regret having waited so long to write Un ABC de la barbarie, published in December 1998 by Editions Al Dante in the collection Niok.
Frank Smith:
Author, editor (director-founder of the Editions Dis Voir of the collection of books/CDs “ZagZig”) and radio producer (co-director on France Culture of “L’atelier de création radiophoique” from 2001 to 2011, and responsible for the production/hosting of the program “Poetry is not a solution” in 2012), Frank Smith puts the question of the document at the center of his research and creations. He is currently in residence with “Writers in Seine-Saint-Denis” at the Espace Khiasma and the Archives nationales as part of the project Choeurs politiques/Glissement de terrains.