Ismaïl Bahri : «From Orientations to documentary»

Continuation of an exchange between Ismaïl Bahri and Olivier Marboeuf, begun as part of the artist’s residency with La Fabrique Phantom, and in relation to the presentation of the video Orientations at the FID Marseille 2013. 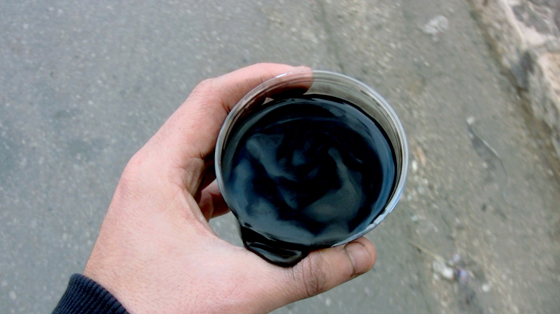 Olivier Marboeuf: Dear Ismaïl, the presentation of your video Orientations at the FID Marseille is a good occasion for us to continue our discussion. Already by its title Orientations evokes the idea of the unknown, of unknown territories. How do we move, how do we find our place (which is also a question of orientation)? Obviously this touches on the principle of seizure/repossession. As I’ve already mentioned to you, I think about the innate violence in the act of naming, of catching hold of what is nameless, bringing it out of the shadows and fixing it in place. It is an act of colonization that preoccupies me and as in the case of the repossession of the form of the island from the idea of the form of the ocean, I’m interested by the way in which experiences and narratives can be fabricated without repossession. And so what you set in place with Orientations seems very exciting to me, very accurate. Again, there is a question of touching from a distance, showing without naming, without repossessing in a definitive way. Nothing is set in stone, as the trembling ink in the glass bears witness. Clearly in the attention to detail—I’m trying to find a welcoming expression because there is a real softness to the way in which the image is revealed—there is a double image. The one in the glass and the one the former presupposes, the ‘out of range’ that suddenly becomes extremely presently even as it remains invisible, this ‘out of range’ that we finally do see, but only in a spectral register.

Ismaïl Bahri: Walking, glass of ink in hand, minutely observing what appears on its surface, is already filming. Orientations considers the act of filming, the gestures of the person filming, perhaps. I film myself trying to capture the images in that glass. In this sense, Orientations makes reference to the origins of film, to the historical moment when images were filmed at the same time as the recipe for their fabrication was made, at a time when filming remained for the most part a simple experimentation, where the operator was not necessarily ahead of the experimenter. What continues to interest me with this video is the fact that it captures a research in progress. We see a simple experiment that is also slightly astonishing, because difficult to name. What I mean by that is that at the time I was making Orientations, I had difficulty establishing what I was doing exactly, I had difficulty taking hold of my gestures, to put it another way. It was maybe this that interested me so much with this experience: discovering ways of functioning without ever determining a specific modus operandi. Not determining the gesture and thus avoiding the definitive capture of the image. It seems to me that it is the emergence of the ‘out of range’ that, in the film, finds words to describe the research in progress. The out of range is re-framed, received in the glass, but it is also revealed by the passer-by who, at the end of the video, approaches me and asks about the reasons for my presence and my activity. What interests me in this exchange is that this person designates the filming process in his own words. He describes it from a different angle, his angle, a view someone watching the film can only imagine. While trying to understand what I was doing, this character became an intercessor, a go-between, if you will, between the spectator and the video, a sort of admonitor, perhaps in the sense that Alberti intended. In Renaissance painting, the admonitor is the figure who indexes the important elements in a scene. Integrated into the representational space, this mediator guides the spectator through the image. He is the go-between, waiting at the threshold of the painting, in the space that separates the work from the public.

This relates to what we were saying about Mandrake has disappeared and the way in which certain elements of illusion and magic were part of the unveiling of the trick. In Orientations, the outside arrives, via the edges, and comes into the center of the image, thereby designating the hors-champs or out of range from which it came. And it seems to me that the way the glass receives the surrounding landscapes is similar to the device receiving the character. These doubles arriving from the ‘out of range’ allowed me to let go, to accept what happens, without trying to control it. In this sense, what interests me in Orientations is that we see a way of filming via the intervention of intercessors. To indicate a center by way of the ‘out of range’, whether through the intermediary of this figure or elementary intercessors, in the case, the surface of the glass of ink. 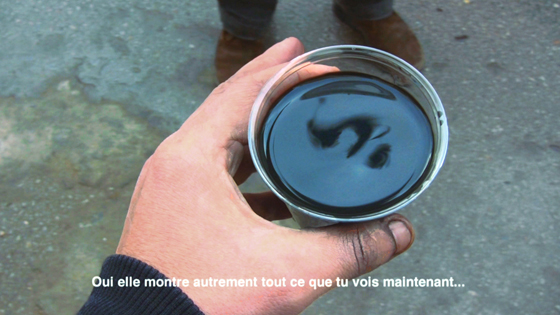 Olivier Marboeuf: In the context of the FID Marseilles, where the documentary is spotlighted, there is another idea that seems interesting to consider in connection with Orientations. The scene of the accidental entry of the passer-by into your experiment is not only a form of conclusion to the film, but also a radical change in its register. We go from a filmed experience to a documentary experience. I have the impression that this moment shows us a great deal about what constitutes the threshold of the documentary experience. The capture of the real is not enough to define it—and compose it—completely, a certain reflexivity is needed. There has to be an ‘other’ who allows us to ‘reflect’, to both think us, as well as to see us. From there, we understand how much the reflecting surface—the ink in this case—is a space for both seeing and thinking in the same movement.

Ismaïl Bahri: It’s true that the intrusive eruption of the passer-by explodes a rather autarcic bubble, totally turned into itself. When the device opened out—when the bubble burst—I remember being very troubled. I almost stopped filming. The unexpected exchange redefines the contours of an experience for which we have almost no information. It situates the experience, gives information about the context and introduces different elements, all at once, since we get the feeling the passer-by is trying to target me, to situate me, or at least to understand what I’m doing and where I’m coming from. From there to shifting into the documentary genre…I’m not sure. But I agree with you when you say that this moment defines a limit, a turning point. At the end of the video, we’re no longer in the domain of experimentation and not yet in a documentary. We may have here the elements of a documentary in gestation, a latent documentary.