'tales of the future'

From September 24 to October 4, at the Espace Khiasma and partnering sites, the 16th edition of the festival RELECTURES renews its links with the power of fabulation !

Program (pdf)
At a moment when our vision of the future is marked by political, economic, and climatic uncertainties, which generate angst and the decomposition of social links, how can we access a future which preserves a dimension of promise and radical transformations?
By following the thought of the American philosopher Donna Haraway—and her great influence on leading European thinkers such as Isabelle Stengers or Bruno Latour—this edition of RELECTURES invites a certain use of the potentials of science fiction, not only as a genre, but as method. Renewing with the power of fabulation, with the tale mobilized here as generator of alternatives which permit construction and allow us to take hold of the future other than as a mere aggravation of the present.
In this way, the ‘speculative narration’ that interests us is in opposition to futurology as practiced by the society of risk and prevision: it takes advantage of our capacity to resist the forces of probability and represents ‘the struggles of the possible against probabilities’ *. The use of story as a space for experimentation considers possibilities for openings, for creative and inspirational ruptures. We welcome these multitudes of manners of recounting the world, seeing them as possibilities participating in the foundation of a common future struggling with the ideology of decadence and its deadly nostalgia.
It is also a question, with this open reading of science-fiction, of building a bridge between scholarly and popular literature. A place for decoding both official and alternative contemporary history, in the form of oral wanderings through a galactic archipelago: practices of divination and mutant becomings, biological interactions, cyber feminism, post-colonial fabulations and spatial colonialism, multinational societies of control, ephemeral cités and galactic peripheries…
On the horizon of each of the forms proposed by our guests (Bruno Latour, Fabrizio Terranova, Jean-Pierre Ostende, Bruce Bégout, Emmanuel Adely, Emmanuel Rabu…), exploring extremely different narrative methods, from the book to performance, passing by way of video games, the following question will be asked: how can we project ourselves toward our future in a way that does not lead toward the ideology of an announced disaster, how can we regain control of our common future? 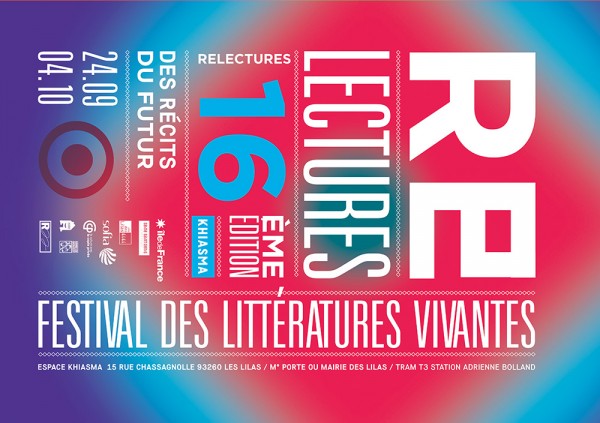 Each year RELECTURES proposes a programme blending current literature with writing practices that emerge from contemporary art. RELECTURES is thematic and considers, from one edition to the next, problematics linked to the question of narrative. A festival of living literature, RELECTURES reveals the trans-disciplinary processes of authors and artists, opening up alternative spaces for literature to invest (stage, screen, radio, flux, installation, neon, posters, speakers or the body of the performer). Created in 2006, RELECTURES is a two week long event, in September and October. Beginning at the Espace Khiasma (Les Lilas – 93), it then invests partner sites, in Seine-Saint-Denis and the 20th arrondissement of Paris.