Statement by Aline Caillet, head of the Khiasma board

As president of Khiasma’s board, it is with regret I have to announce that Khiasma will cease its activity at the end of October. The organisation’s difficult financial situation leaves us no choice but to take, in agreement with the team, this difficult decision which saddens us all. Over the past two years, after parts of our funding were brutally cut, the Khiasma team fought to invent new ways to carry out its activity whilst staying true to our identity, and our characteristic daily practices of the sharing of culture. But it is clear today it is impossible for us to make up for the structural debt that poisons our everyday work.

Created in 2001 to conceive and carry out artistic and cultural projects with the inhabitants of the Parisian North-East, Khiasma opened Espace Khiasma, a space for talks and presentations, at 15 rue Chassagnolle in Les Lilas, in 2004. Countless artists have since gone through our walls, often very early in their careers; countless individuals, from near and far, have shared our debates and discoveries, over a film, peculiar images, a meal, a workshop.

Khiasma’s disappearance means the loss of a singular gesture, that of a consistently uncomprimising artistic direction combined to a true hospitality for voices both strong and fragile, an irreverent independence nurtured on the fertile soil of Seine-Saint-Denis, with the help of those who live there and those passing through. A place opened up to life, to the good and the bad news of an epoch, a territory.
In a time when populism is gaining space and swaying democracy, when culture is slowly becoming the toy of the fortunate rather than a common good and a practice of sharing, this is no good news.

But at this precise moment, I think of all the young professionals we have trained and to whom we gave desire, knowledge and support, of the artists and writers we welcomed, of those who came to practice and discover forms, worlds –schoolchildren and neighbouring families, students and young migrants, all those who enabled us to piece together a place by and for our community, beyond the economy of fear. I also have a thought for all those who supported us all these years and thank them sincerely. I feel, finally, that we have done our part, that we didn’t keep anything back, and that some of this will necessarily remain, for those that will come after us.

On behalf of the Khiasma board and team, I would like to say goodbye, and warmly invite you to Espace Khiasma on Saturday 20th October at 6pm for a closing speech and evening. 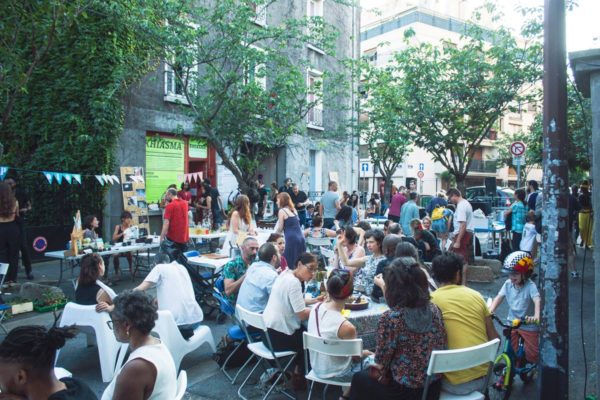