curator: Olivier Marboeuf
vernissage: Thursday March 5, 2015, from 6:30 PM
À dessein (By Design) is a series of exhibitions where the art of drawing is approached as a system of thought, a writing in time and space that tries to capture (without freezing) the structure of this contemporary moment, whose definition escapes us.
By Design (Metis, narratives and climates) presents recent works of Constantin Alexandrakis and Claire Malrieux, two universes which, using radically dissimilar artistic gestures, explore the structure of what is created in the present instant. 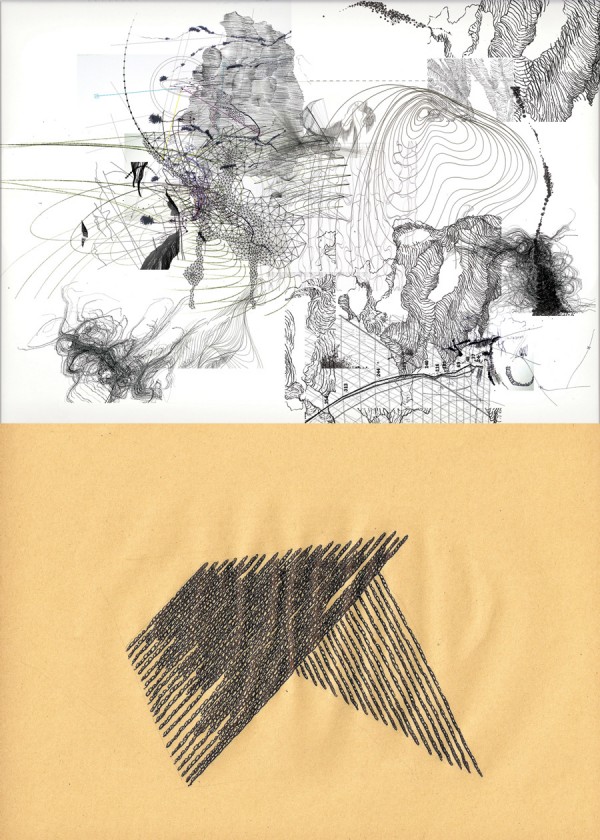 The primal artistic gesture for Constantin Alexandrakis is that of scribbling, the doodling that emerges from a distracted pen during a phone call. From this improbable conjugation of curve and line, the artist develops a tool for exploring spaces in perpetual metamorphosis. The meaning of these creations seems impossible to grasp, they are tales with neither beginning or end, a hypnotic flux. An homage to the Greek goddess Metis and her spiraling wisdom and craft, these graphic works follow the twisting paths of ruse and cunning, where meaning is never fixed in stone, which lead to a place of delight and interlacing secrets.

Claire Malrieux imagines contemporary narratives based on two series of drawings conditioned by computer processing and data. Every day, using an algorithm, The Atlas of present time produces and edits a new composition determined by the arrangement of the collected written and graphic notes and drawings of scientists all over the world. General Climate proposes another series of “informed” drawings, a digitalized program which stages and illustrates the climate of the Anthropocene period (idiocy, pollution, overpopulation, production, greenhouse effect, explosion, violence, corruption), by utilizing data from the domains of physics and meteorology.

The Atlas of present time received the support of the patronage commission of the National Foundation of Graphic and Plastic Arts. (FNAGP).