The festival RELECTURES 15, ‘d’après documents’ invites Marc Perrin this year. He will appear at the Espace Khiasma on Sunday, September 28, 2014, offering the occasion to revisit his work and question the acts of writing he develops. Acts to be considered by their differences to and repetitions with those of American Objectivist poets such as Charles Reznikoff.

Amandine André : What is the writing process used for Avoir lieu 2011?

Marc Perrin : The series Avoir lieu 2011 was developed in early 2011, in large part using AFP (Agence France Presse) dispatches accessible on the Internet. AFP dispatches relative to uprisings, demonstrations and repressions that occurred during the “Arab Spring”, but also dispatches concerning a hurricane in Australia for example, or a scientific discovery or economic event, etc.. The ensemble of this material was used with the objective of continuing work begun in 2010 on the idea of the “event”. A first book, Avoir lieu, was published in November 2010 with the editor Dernier Télégramme.

How were these excerpts used, or reconstructed?

My wish was first to anonymize/universalize the situations dealt with in the AFP dispatches, and this with the intention of putting light on the forces in action, without naming them, in order to highlight the relationship between forces at play more than the forces themselves. In the reworked texts, men and women, whether or not their names are cited in the original dispatch, have been replaced by personal pronouns corresponding to their gender, the name of every city is replaced by “city” or “it”, “hurricane” becomes “it, “army” becomes “it”, “demonstrators” becomes “they” etc. (translator’s note, in French, nouns are masculine or feminine, they are therefore replaced by “he” or “she” or “they”). An historic event is sometimes recognizable when this new text is read, but sometimes the actions, which have become more abstract, may become projection surfaces for the reader. The abstract turn the texts had taken suited me for a while, but then it didn’t. The use of these abstract entities, “he”, “she”, “it”, etc., although they permitted a reading of the event, made it too unreal. I continued to work with the content of AFP dispatches, as part of the Spinoza in China project, but kept the names of places and people. With the wish, this time, to mix the account of history in progress (by naming the actors of this or that event—economic, social, scientific, etc.—whether the protagonists be humble of powerful, known or unknown, all of them participating in the historic movement in progress) with the account of the experience of one character, named Ernesto, also a participant in this history, and all of this precisely during the month of November of the year 2011.

My writing work is done by reading aloud, by pulse and rhythm, by the growing understanding as the work progresses, from reading to re-reading, of the advancement of what is happening within the text itself. This is another type of event, also in progress, close to what one could feel about a thought, which is produced as it is uttered. The writing work is then put into play during lectures and performances, which are for me moments when the writing occurs again, to a certain extent, it recaptures and pursues its oral pulse, continues to develop and become itself, etc.

What is a poetic document for you?

Let’s say: a document that a subjectivity selects and then reworks, with the objective of increasing the power of the project in progress.

As far as I am concerned, I can say that I’m currently working with 3 types of documents—3 types of material: 1. personal notes, which are taken daily, and that I rework in total freedom and which become, through the character of Ernesto, a text that is partly fictional; 2. the texts from AFP dispatches, for which I keep as close as possible to the events described in the original text. 3. Spinoza’s Ethics, excerpts of which accompany the text of Spinoza in China, as the character of Ernesto progresses in his reading of the work. 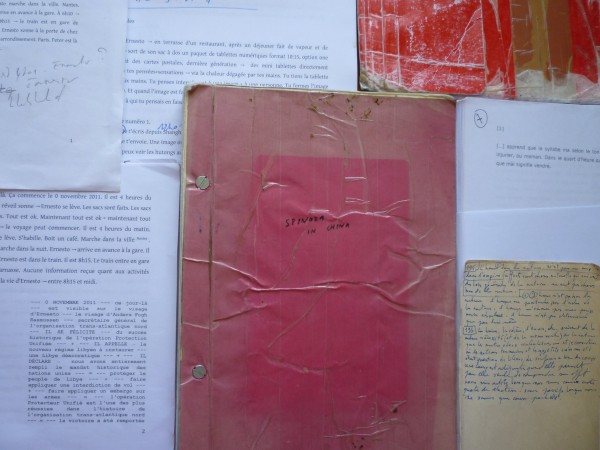 Do you think that your poetic work follows the same poetic gesture as the Ojectivist poets? Charles Reznikoff says: « By the term ‘Objectivist’ I think we want to speak of an author who does not directly describe his emotions, but what he sees and what he hears, which almost resembles a court testimony, indirectly expressing his emotions by the choice of his subject and of his music if he writes in verse.”

As far as my work using AFP dispatches, I recognize myself in that Reznikoff quote. In particular concerning the choice of subject, choice, yes, which could not be more subjective. And also concerning the pulse and rhythm of the word or poetic voice, what he calls music. For the texts that evolve from my personal notes, on the contrary, it would be more a question of asserting and accentuating a subjectivity. And more than an erasure or lessening of my own initial emotions, it’s a matter of getting them to overflow, by amplifying them, sometimes by inverting their original movement. In both cases, working from the AFP dispatches or from my personal notes: I think it’s a matter of finding a distance between a subjectivity and the object that is being born: a text. Additionally, to expand on the Reznikoff quote, before emotion, I think of the sensation. Sensation, and how it is contemporaneous with thought. This contemporaneity can be perceived of as being part of the time of intuition. I have a total confidence in intuition, you feel the relative rightness at this distance between yourself and a text. You also feel that this distance is contemporary, in its turn, with the rightness of our presence.

Can you tell us about the Spinoza in China project?

I can quote you 3 excerpts from what I’m going to read at RELECTURES 15. 1. “Spinoza in China is the autobiography of the child Ernesto, 10 years old and a few seconds, or, 10 years and a few centuries, at the precise moment when emancipation for him is suddenly no longer an abstraction. That’s the program. As to the facts, we’ll see → Spinoza in China is the tale of the multiple instants of a slow, laborious, but tenacious emancipation → in other words → the tale of moments of a very alienating struggle and of a joy that is sometimes brilliant → in short → Spinoza in China → is the story of a combat. In 5 rounds. With bliss old boy as the final bouquet.”. 2. “Spinoza in China is also an editorial poetic program, for the next 34 years. Positively: anything goes. 5 volumes to be published. Volume 1: Ernesto November 2011. Volume 2: Ernesto 2012-2020. Volume 3: Ernesto: 1968-2026. Volume 4: Ernesto -73/2032. Volume 5: Ernesto 2038.” 3. “Spinoza in China is also an exhibition of the Faces of Ernesto, from day to day, in the form of a series of portraits, whose overarching title is the following: « If the state of the world is a bit visible on my face then I can say a bit that I am of this world.” This is the title that I give to the ensemble of texts developed from the AFP dispatches. More succinctly? Spinoza in China is a sort of long term poetic research, relying on the tension created between the notions of liberation and liberty. With at least two trips to China. And Spinoza’s Ethics in my pocket.