After a several months’ long residency at Le Vau elementary school (Paris 20th), Hélène Coeur, Célio Paillard and Frédéric Mathevet revealed the sound game they imagined and created with students from CE2-CM2: PAHOU WAHOU! Launched at the neighborhood fête on June 15, 2014, the game is now making its world tour. It has even been presented and experimented on the airwaves of Radio Campus, thanks to an invitation from Radio Cousue Main. This game also represents the final stage of the residency project le Cri de la Fougère; the artists’ offer an impromptu report on the project at the end of the article.

Pahou Wahou is a group game that lets you listen to other musics, invent new melodies and change stories…
It’s about “rethinking the world” with sounds, the way you might do at cocktail hour, or around a camp fire.
The game is for the curious, with no age limits. It will be available as of this summer in several places in the neighborhood: the Maison des Fougères, Khiasma, the Le Vau school. Come by and play!

The action, led by Hélène Coeur, Célio Paillard and Frédéric Mathevet, is the fruit of an almost two year long collaboration.

Together, they gave the students of the Le Vau school the chance to listen to music, play, compose, represent, imagine, sonorize, interpret and communicate. In 2013, the first series of workshops resulted in the creation of a book-CD. This year, the students were asked to question the notion of the portrait. Together they composed a group portrait, based on the experiences, practices and particularities of each participant.
These workshops for sound and visual practices revealed to the children other ways of perceiving territory.
They are part of the program Mythologies, proposed by Khiasma and supported by the Fondation de France, the Caisse des Dépôts et des Consignations, the city of Paris, the OPH – Paris Habitat. 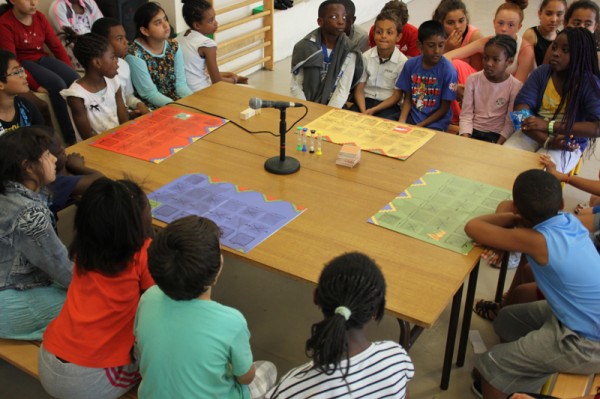 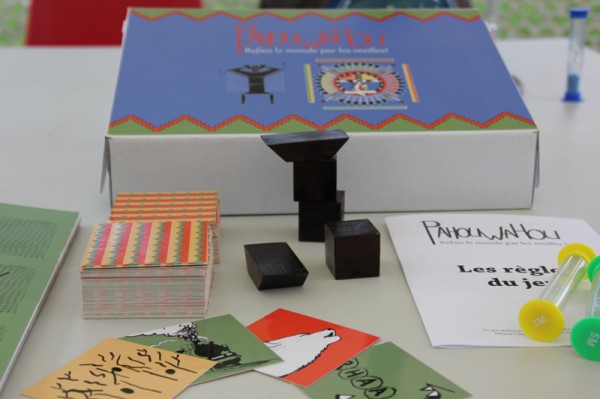 Le Cri de la Fougère is a workshop for experimentation and sound creation that took place between January and June 2013 and October to June 2014. It was led by Hélène Cœur, Célio Paillard and Frédéric Mathevet, artists in residence at the Espace Khiasma. These two years of sound ecology allowed us to approach several notions linked to contemporary sound art, such as the apprehension of the surrounding sound ambiance, its description and ways to distort it, the plastic writing of sound, performance, the expressive and symbolic approach of sound associated in particular with the themes of the “portrait” and “memory”.

But Sophie, a teacher with the classes we worked with over the two year period, explained to us that this work went greatly beyond the objectives we had set for ourselves, and that the work we were doing with the children called for many other educational competencies: writing, math, coordination, as well as many social skills.

Our relation with the teacher during these two years was primordial. She allowed us to have a more precise idea of the effects of our workshops on the students, session after session. And we missed her when she excused herself for a few minutes during the workshops, she who was the guarantor of the frontier between silence, concentration and hullabaloo.

One part of the group was able to follow both years of the workshops. In CM1 the first year, they were in CM2 this year and tutored the CE2 students during the workshops. From the very beginning of this school year we were able to judge the scope of the workshops. The children remembered what we had done together: the exercises, experiments, recordings, the sound story we’d invented the first year… But especially, they remembered the ways to do things, and the words to express them. Manners of listening to and producing sounds, and the words to describe processes and sounds. The first year we put the accent on listening and distorting sounds in the nearby environment by proposing that the children “arrive” in their neighborhood as if it were a desert island. The totality of these listening sessions, recordings and sound games resulted in the writing of a story: “The survivors of the Fougère”.

It was also very interesting for us to see how the CE2 students, who were new to the adventure, adapted themselves with the help of their elders. They understood how to do things by imitation at first, then the CM2s naturally began to offer to help the younger children. We facilitated this by multiplying opportunities for interactions between the ages. The themes of “portrait” and “memory” allowed us to use a different manner to explore sound exercises. The students were able to exchange thoughts about their familial environments and their culture, thereby creating new links between them.

Today we’ve reached the final stage of our workshops. We set ourselves a challenge with the children and Sophie: to create a game that would serve as a report on the two years of work. But also offering traces to reactivate (from ages 7 to 77 we hope) what we discovered together, as a shared apprenticeship. We took as a starting point the idea of a great “tribal” meeting, or in a larger sense, links that are created between people. This meeting consists of reactivating or constructing in a group memories, portraits, environments… using our mouths, bodies and the surrounding environment to produce sound. This collaborative game proposes to build one’s “house”, one’s habitable space by taking into consideration all the dimensions of that space, whether they be psychological, social or environmental. An “ecosophic” game that proposes to rethink the world through our ears: Pahou Wahou!