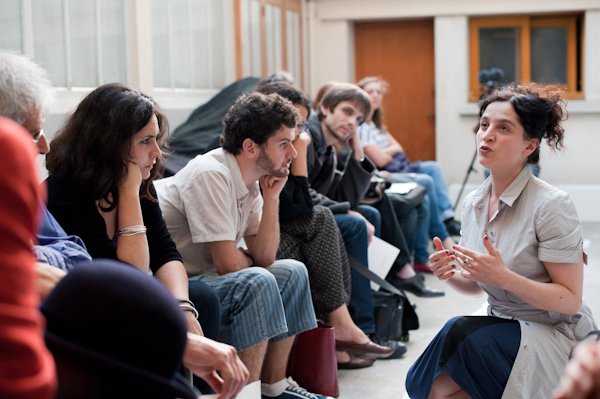 Reading your last letter I was happy to see all the trails—of thought—traced since our first exchanges, which have progressively deepened and been enriched by a small community created by moments of encounter, of co-presence, but also by the way you yourself play the role of your beloved intercessor, a membrane between the different words and spaces you cross through and that cross through you, finally serving so that the text becomes in its own way a space for relation, becomes a site. A few weeks ago I was thinking of the notion of a mediator in art for an encounter in which I was to participate; it came to me that one of the possible ways to consider this thorny question would be to think of the mediator as a narrator and his/her words, not as an authority on what is seen, but as a particular space in which what is seen unfolds—a possibility of a venue or place. Words or speech as exhibition site, as an extended conception of the space where the art works take up residence. When I speak of extension, I mean that things may unfold by the edges, by the limits of what is considered to be the place of art. And so, not words or language as the central object of contemporary art, which would literally prevent the work from occurring, that is to say transpiring as a sensitized experience with a necessary secret and inexpressible dimension, but words that would be an attempt at moving beyond the space where “it happens”. As for the set-up for Percées, an attempt to create a relation between an experience and what lies “outside” of it. Discreet words, in the sense of a small quantity, but also something that would happen without much ado, very simply, without anything being directly perceptible.

To come back to words, I realized that they have a significantly different weight when they are pronounced in public, taking on something of the magic trick. And more so when speech allows itself to occur without authorization. This comes back to the question of incompetence that we considered at a previous Phantom Monday. The space for incompetence is perhaps the vacant space, which can be occupied in a society that ceaselessly demands individual competence and that is obsessed by the mastery of risk, two dimensions which manufacture a “culture of projects”, or a savoir-faire not related to the experimentation of possible situations but to the control of what is actually going to occur—I almost want to add “if all goes well”. I admit that the incompetence for which I see a potential—and for which I would like to understand how it could be positively expressed—is very particular. It is an incompetence which requires desire, presence and not the incapacity for acting, the loss of vitality created by the pressures of a performance oriented system—which knowingly produces the incompetence of the consumer, never open to anything other than a system of transactions: for goods, time, the experience of emotions. I could say that it is the incompetence of the amateur that interests me, because it is predicated on the desire to experience things oneself, with no projections that go beyond the experience itself. It is not easy to speak of the amateur today without falling into rather political controversies that oppose amateurs and professionals of art, creativity and creation. We can simply note that the augmentation of the level of training of art and culture professionals translates as the manufacture of a legitimized space for speech, registered on the side of academic knowledge more than that of thought procured through experience—which could be considered as one of the foundations of the artist-thought and may be a place shared by artist and amateur.

This clearly produces a difficulty for taking action, sometimes even a fear, which for me goes against the idea of creating a site and explains how communication is used as a form of long distance action, “faire signe” or “informing” or “indicating”, rather than “faire lieu” or “letting something occur” or “making a site”. “Faire lieu” relies on the necessity of a co-presence of bodies, the building of a structured situation by way of an ensemble of decisions as well as an entropic production of knowledge extending radically beyond the limits of what may be “pré-vu”, or “fore-seen”. Bodies of knowledge that are often unclassifiable forms of production of thought, for which it is necessary to know the place of enunciation in order to understand them, fields of knowledge that speak as much about themselves as about the sites in which they are constituted.

“Faire signe”, (informing or indicating), obviously targets something else entirely: the efficacy of the result. It is an operation that “aims to”, that doesn’t get lost along the way, that goes directly to the objective, without even allowing its trajectory to exist. This “faire signe” includes communication strategies produced by institutions, curators and sometimes by artists themselves. It is an ensemble of gestures structured around a precise objective, a project, an assemblage of stimuli aimed at a situation that from the beginning is already in the past, that will have no need for a presence or a present. “It occurred” and therefore does not need to occur to attain its objective. In this perspective, the ecology of the “faire signe” is not situated anywhere, it is a spiral in the space of communication, which has no exterior, no place of existence. Even if what interests me lies clearly on the side of “faire lieu”, of the fabrication of experienced situations, that doesn’t mean making a case against communication, but to try to see how it can contribute to intensifying the experience of an occurrence, or site. It is in this way that I came back to the idea we evoked previously: of “haunting a site”, or bringing back in a shared time different time scales of the site. A site that is haunted by itself, by the different experiences that have crossed through it. And another necessity presented itself to me: the witness, in the sense, here again, of an amateur historian who shares both what he/she has seen and experienced as well as what he/she has forgotten—the inability to remember—allowing others to find spaces for projection in the narrative. We will have to speak of this again. In any case, it suddenly seems necessary to me to question the length of relations between artists and the site and the possibility, which is incongruous in the current situation, of considering the former to be witnesses able, by their forms and languages, to continuously renew the history of the latter, to fold the different time scales of the site into themselves—an operation that could potentially also concern curators and the personnel of institutions.

It seems important to me to create spaces where experimental public speech may be practiced, not necessarily expert speech, but words which would proceed from an attempt, an idea of work something like a half-made sculpture emerging from the original block of stone. An idea whose origin remains still visible and shared. We lose sight of the possibilities of producing an idea with others, in fear of what may be demanded—regards, risks, relations. It seems clear to me that what makes an occurrence—in art and elsewhere—has something to do with a certain intensity, a certain investment, whose conditions for existence must be understood. In a text that I am working on right now, “A fire without light”, I’ve become interested by the paradoxes that in my view are the foundation of site and in particular the question of goodwill. How can we create conditions of good will that are necessary so that an ephemeral space can appear? How can we create them when it does not seem possible/desirable to want such a thing as good will, that it can only be the indirect consequence of a particular ecology, situations and attentions—and in this sense, good will is produced from the outside. It cannot be an injunction—like cultural democracy—and we cannot establish it except after the fact. The site is thus what is suddenly there—as we’ve sometimes experienced it at certain Phantom Mondays—but not always, and not always there where we expected it or when we expected it.

It emerges from the margins, by a series of intensities that reveal it. It cannot be targeted. This is also what I retain from our recent exchanges with Jean-Paul Curnier; to kill an animal, the hunter must not aim at its heart, nor even want to aim at its heart, he must become one and the same space with his prey and the arrow that then pierces the animal’s heart will not be treasonous, it is instead part of a common experience, a history of survival, pronounced without violence—like the Indian hunter who takes the time to explain to his dying prey why he killed it and offers it his excuses. The “fire without light” is that place that has no particular form, nor contours or limits in time and space. In the situation that concerns us, the works of art are no more inside the site than the site is inside them. There is a form of rupture of scales and authorities which I find echoes what your imagined works do to the site and what the sight does to them.