R. Fortune is a fictive character developed in many of Camille Dumond’s projects. The episodic accounts of R. Fortune are, in turn, a form of postulate, the account of an event, or merely simple situations experienced by R., who is searching for forms of communication. A link with the cinema slowly unfolds in the text, following the strange path of the character. 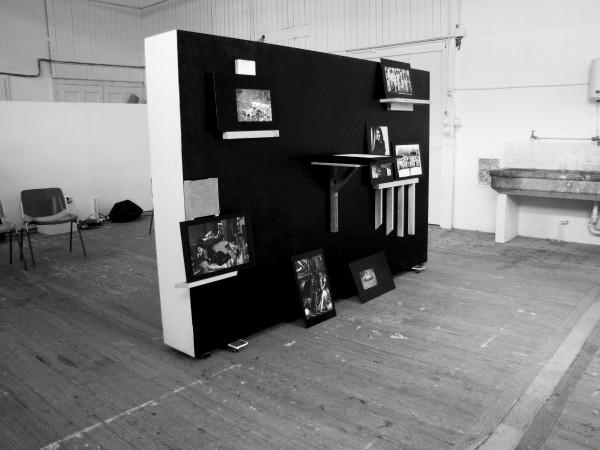 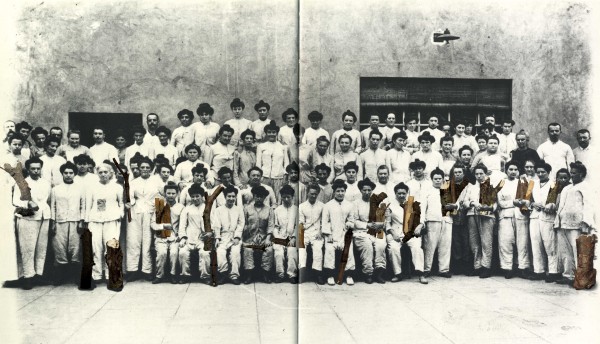 The impulses which led R. Fortune to believe that Wood and Cinema are related

She speaks “2013”. Wood permits rebounding and crossing through the amnesiac material of our modern equipment. Wood is used everywhere—it can be sculpted. A film seen on a screen or thanks to light requires an ensemble of technical material in phase with its time—contemporary support materials are also those of the period.

“Wood has always existed,” says R. Fortune, “it is obviously one of the first materials to arrive on Earth.” The dimensions of wood and film are never the same, and the reflections of light needed to produce both have no relation, either. The wood of the tree grows in the light of the sun, its greenness is privileged according to its branches having access to openness and therefore, to space. The film is also light and space.
“Production of wood should be replaced by production of films,” adds R. Fortune.

The group around her approaches slowly. She shows projected images, a remote control in her hand. She comments. Gigantic lumberjacks, serious faces, hypotheses of success, temporal sector, industrial sector, natural resources, majestic objects, black forms, lakes and liquid roads, organized passages, itinerary of wood.
Objects must change hands, somewhere, be replaced.
The wood film. The film of wood. The visual matter finds its origin in filmed fields, filmed lawns, filmed branches, filmed tools, filmed cups, filmed chalets, filmed bushes, filmed timbers, filmed floors, filmed boats, stairs, panels, logs, filmed fires.
TV: The character is holding in her hands an object that she adulates, that she prefers, that is hers. The enemy arrives. The object is suddenly replaced by another, because of this enemy in the story, present in every episode. The new object has a strange value, ridiculous in comparison with the precedent. The character is disappointed. Forms of current disappointment: string of pearls/fibrous cord. Meringue cake/metal cup. Cheese/box. Gold statue/wood statue. The objects are no longer precious, or on the contrary. They are replaced by boring hypra-domestics that do not melt on the tongue of the character. Wood is OK, luminous or blind.

The theoretical discoveries of R. Fortune in the spring

She speaks with someone:
“You always choose situations for your films where people are obliged to be together. Members of the same family, servants for the same evening event, soldiers in the same conflict, workers from the same factory. Because of circumstances, they are forced to meet, to share things they would prefer to keep to themselves under usual conditions. As if the act of filming created the relation. It is surely on the film set, as it is in a job for the State: these situations orient us toward a protective and obligatory complicity. People who do not choose to be together are more tolerant.”
I hear:
“What is the place? Yes, we can talk about it. For example, the characteristics when you go there.” “We can speak of a path that crosses through the place when you walk through. There is a sort of parallax effect. I’ve often wanted to talk to you about sawmills: first, the pieces of wood seem to be parallel; if you walk toward the left, they move toward the right. If you enter into the space: they open up. Finally, when you pass over them, there is another path that links the two sides.”
The other:
“I want to ask you again how it appeared. When you hint that there was a sort of invention, that we’re going to learn something about construction, that it’s oriented toward an objective, or that it’s going to teach something… I don’t even know if it’s still true.
Her:
“Each time the sculpture is finished, everything you speak of is completely consumed. All the relation cannot be measured. In any case, I hope so. Some people believe it, so they build a mental construction and explain their intentions. Then the construction verifies their intentions.”
I see them looking around themselves.
For our sculpture, you have to walk and look, that’s all. The sculpture occupies the whole valley. You said that one of your preoccupations that brought you to make this film was ‘where can I insert myself?’ I personally informed myself about systematic deviations. I recently linked this affair of cognitive biases with your manner of interpreting objects and sculpting filmed voids. I read: ‘Certain biases can be efficient in a natural milieu such as those that sheltered human evolution, while they were revealed to be unadapted to an artificial modern milieu.” The vulnerability of forms seems important.


R. Fortune’s discourse in front of the express cave

Her tights with runs in them, her high heels, her strong voice. They are sitting on the steps of the dreamed cave in Switzerland. The express cave has an underground part which is often flooded and that brings up objects from the past; they float and their colors are faded. The water is saturated and it is coupled with an odor—you’ve smelled the odor—fluorescent moss appears on the underground surface. The floating objects make R. Fortune think of lightweight objects. I ask her what could float at my place.
“Fruits, probably.”
She sniffs and touches the yellow walls, near the steps. The ventilation of the cave has caused the wood to dry out in its deepest veined interior. “My neighbor is building a greenhouse. He collects wood wherever he can and also glass, but he doesn’t like glass, he finds it aggressive. I told him that it was the same for wood and stone, that there were wood picks, wood barriers, wood arrows.” Then she looked at the steps with round eyes.
We remained in front of the cave, surrounded by pieces of the past.

R. Fortune gets rid of a problem by watching films

A plane flies around a planet with a doughy surface. A lion roars, looking toward us.
Low levels, saturated tones. A smiling child smashes a target. A woman in blue is wearing light.
Names of those who help from the bottom to the top.
It’s the woman who tells the story about Frankenstein. She smiles. She says: “The air is full of monsters. A tempest near the lake, at night, it is a night storm in the year 1816. After the explosion the previous year of an Indonesian volcano, the climate was particularly bad that summer, marked by violent storms.”
A plane lands on a planet with a dry surface. A lion simpers, looking at the sun. High levels, pastel tones. A child notices a target and unhooks his ax. A woman in blue releases a beam.

Born in 1988, Camille Dumond lives and works in Geneva. In 2010, she lived in Leipzig, then continued her education at the Fine Arts School in Nantes-Métropole, obtaining her degree in 2012. Since then she has continued her studies at the Haute Ecole d’Art et de Design in Geneva. In 2014, she commissioned an online exhibition and participated in several group exhibitions in Nice and Saint Denis as well as the Marrakech biennale. R. Fortune is a fictive character developed in many of her projects.