Childrens' workshops: the apparition of images

On October 29th, 30th and 31st  Khiasma, the Maison des Fougères and the Musée Commun invited the artist Juliette Agnel to lead a series of workshops for children, with the theme of the apparition of images.

La Bande au cinéma is group program that associates Khiasma, the Maison des Fougères and the Musée Commun, conceived of for young audiences. Once a month a film projection is organized in each structure of the Band, proposing not just a film for children, but also an educational activity in relation to images, to be done as a family after the film, as well as a participative children’s tea.
Different films are shown at each site, allowing for a larger offer. The convivial nature of these afternoons is certainly one of the re or the large audiences attending the events. It is clear that the Bande au cinéma program serves as an important lever for facilitating meetings between families in a neighborhood, but also as a useful tool for visual education and the development of a critical eye. The young audience program, organized in network between the Espace Khiasma, the Musée Commun and the Maison des Fougères for over a year now, has shown to what extent the cinematographic medium can be a powerful vector for socialization, encounter and circulation for the audiences of the three host structures.
Workshops that sensitize children to images are also proposed during school vacations. They are intended as moments of experimentation. The participants are exposed to different procedures for image animation and creation in relation to film; in the workshops they acquire the skills necessary to express themselves through the realization of short films and by learning film-related techniques.

Camera obscura workshop
Wednesday, October 29th, 2014 at the Espace Khiasma.
In this workshop the children made a camera obscura. This gave them the opportunity to learn about the beginnings of photography and the basic elements of the art: time and light. But before imagining the construction of a camera obscura, the group had the experience of finding themselves inside a black box and discovering images that appeared from the outside, inside a giant camera obscura, made especially for the occasion. The children were able to keep traces of these experiences thanks to cameras made available for their use. 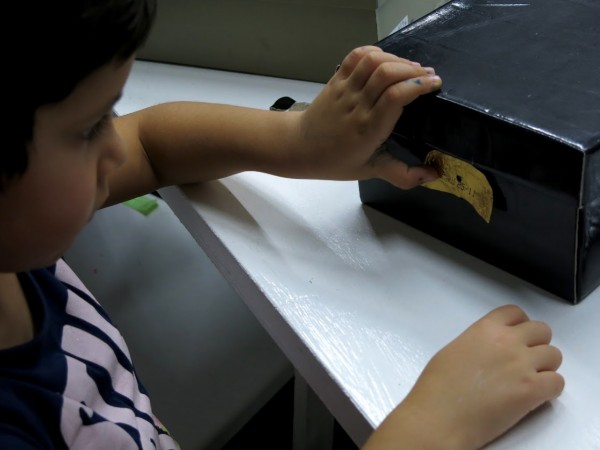 Self-portrait pixelation workshop
Thursday, October 30th, 2014 at the Maison des Fougères.
The workshop at the Maison des Fougères proposed creating short sequences of pixelation, not necessarily in relation to the neighborhood, but centered rather on the idea of character, through the creation of a short scenario. The children created scenes describing an action in movement; these actions were conducted at the Maison des Fougères, as well as in the neighborhood (the Parc Léon Frapié, for example), according to the participants’ choices.
As a group, the children were able to appreciate the different roles in the process, acting as both photographed subject and photographer.

Animated post card workshop
Friday, October 31st, 2014 at the Musée Commun.
The objective of the workshop Juliette Agnel proposed at the Musée Commun was to photograph movement generated by the city in a continuous manner, by positioning small groups equipped with a tripod and camera at different sites in the St Blaise neighborhood.
The participants, disguised as ghosts to celebrate Halloween, could appear and disappear in the animated image, making reference to Méliès and interrogating the idea of editing.
After the photo takes, the team leading the workshop was able to collect the images and quickly edit them so that each participant could view his/her animated images.