And so, sommeils has taken shape. The completed project is a very particular object, the result of multiple experiences conducted over the last several months. Up until the last minute, choices had to be made. sommeils puts the state of the exhibition on standby. Images are under-exposed, restrained and luminosity is lowered. The use of words, which I decided on this summer during the last months of preparation, was also an important element, given that until now sound was absent. I’m offering here a few trails of thought, as preparation for next Saturday’s encounter. But all of this is still fresh and I don’t want to write too much, to say too much. For the moment, I need to find the right words, to think about words and elements that have not yet matured. I would also like to propose a few questions for Saturday. 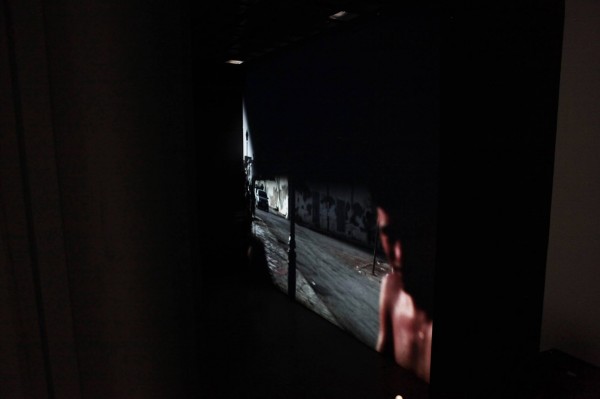 dark room/camera
Penetrating the first rooms of the exhibition is like entering into the camera, into a dark room that seems to diffract into a prism which, from time to time, opens up and allows images to filter through. The last room of the exhibition proposes the opposite: voices and diverse external viewpoints recenter themselves around the camera. One of the leitmotifs of the project was to turn the exhibition into a screening operation: to give the impression that my camera projects itself onto the scale of the Espace Khiasma. The space becomes the camera.

air current
In the exhibition, the draft of wind is the invisible thread that crosses through the space and links the videos together. It is also the mechanical activator: it is the wind that activates the opening and closing of the shutters, creating the light of the images.

probes
The space of sommeils is covered with shadow. Obscurity has been thought of here as the hiding place from which anything may emerge. A hiding place to be penetrated by feeling our way through it, as as exercise in recognition. The discomfort we are plunged into by darkness is important, I believe, because it conditions a relationship of accommodation to what surrounds us. 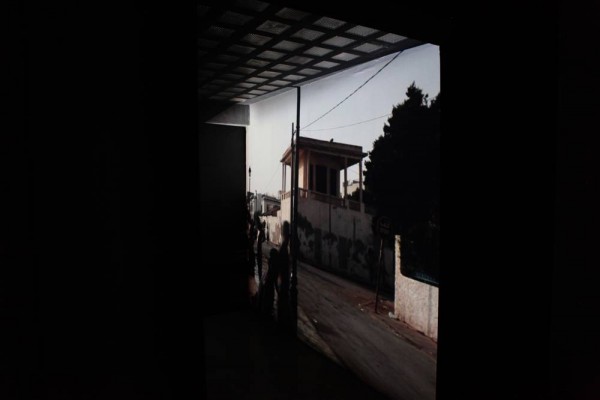 outside
I have the feeling the exhibition is a negative of the outside. Outside is conceived of as the opposite, or recessed space, from a position of retreat. Usually I evoke the real by evoking the outside. But I think I confuse the two and that this point is not clear for me. I don’t exactly know what the ‘real’ you speak of so often means. The outside seems better suited to me in this particular case. The atmospheric variations outside. The social space outside. The outside in counterpoint to the confined, the room, the box, the inside of the camera. The outside can be magical too: the inverted exterior projected by a camera obscura. 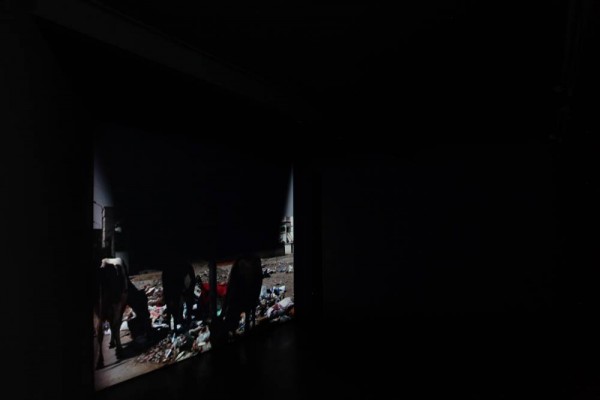 Tunisia
I have the feeling the dissimulation at work in sommeils can be seen as an important probing operation. Sounding the outside via a long distance contact. To approach a mystery, something that emerges, the better to escape. It is not a question of just any outside, obviously. sommeils borders a hidden horizon: Tunisia. Through its lights and its voices, Tunisia is at the center of the exhibition, but in negative. It remains in shadow. This central motif occurs in the margins but infiltrates the exhibition through light and voice. It is less a question of exposing a pattern than the way in which this patterns manifests itself. 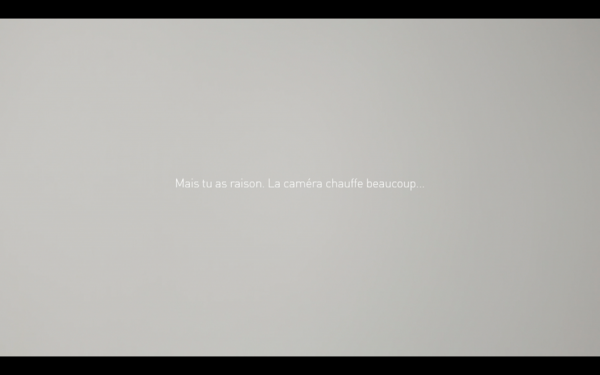 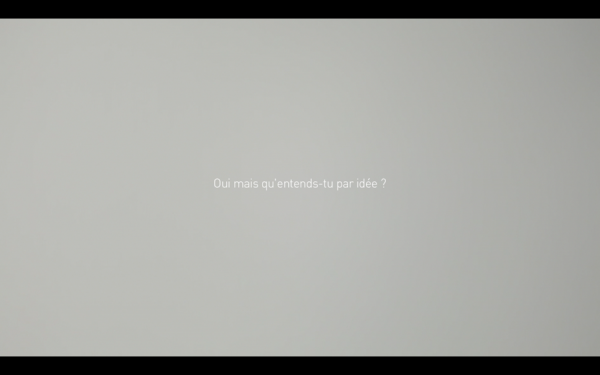 paper
As was the case for Orientations, filming is equated with exploring the terms of an appropriate distance. The relationship to things is established by increments, by the intermediary of an object (ink in Orientations, a piece of paper in sommeils). And it seems to me that the paper shutter formalizes the long distance contact, while its trembling dictates its movements of accommodation. In the projected image, the paper becomes a fissure. It becomes a connector, a film, a surface for contact that accompanies our sight into the filmed space. But this swinging movement links as much as it severs what, through the film, would appear to be a block, continuity or mass, what in the film could become authoritarian or totalitarian: a panopticon, an overview, a horizon, an affirmation where no retreat is possible. I’m not yet sure to what extent, but I think I forbade myself to determine any sort of state of affairs.
feeling the way
It’s important for me that sommeils feels its way, that the exhibition unfolds in increments. The darkness prevents us from having an assured point of view, or a vision of the whole.
sommeils and sondes
It’s on this point in particular that the exhibition sommeils is in dialogue with the exhibition sondes, at the churches in Chelles. The act of probing and touching from a distance is fundamental, via the relationships between scales of distance and luminosity. In opposition to sommeils, sondes is inundated with natural light coming through the stained glass windows. A wall was built in the middle of the first church to serve as a screen. The screen has a dual function: it is the surface on which a video is projected and it hides the central part of the church. By a jump in scale, this imposing, massive wall contrasts with the installation Coulée douce, which is in the second church. In this installation, black sewing thread is unwound from a height of ten meters down toward the floor in a curb. Water drips down the length of the thread. Imperceptible, this installation induces another form of acuity and awareness of things by drawing attention toward phenomena that occur on a small scale. I was stunned to see visitors gathered around this installation where little occurs, around the puddle of water that slowly forms, and to remain there for several minutes. In this instance, the relationship between the acuity and the accommodation of details passes by a form of contemplation that reminded me of the reaction of certain visitors gathered around the blank screen in sommeils, listening to the voices. 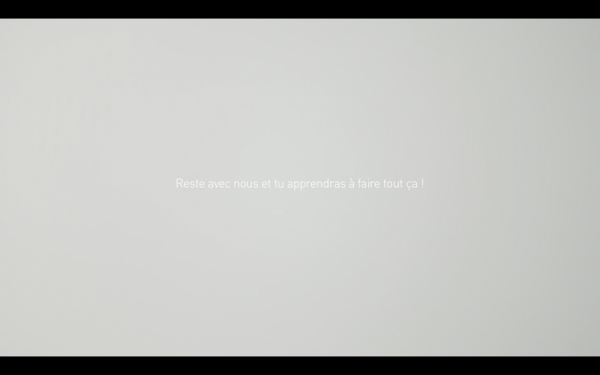 voices
Filming calls for a recurring abandonment to the wind and to the words of others. I film by making the wind my accomplice. The wind also carries with it the voices of people I meet during the filming process. Through their words, these people become the intercessors of the exhibition. In their own way, they frame it, surround it. Without realizing it, they accompany the exhibition and inhabit it with their words.

foyer
The camera becomes a “foyer” (I’m borrowing your term, which I find quite lovely). As soon as it is set up on the site, it is transformed into a focal point around which people stop to talk.

illusion
The voices are enigmatic, as if veiled in shadow. They are even more precious as they come from people who have participated in the experience. Words describe and reveal what is hidden from the spectator at the exhibition, what is happening on the other side of the piece of paper, the reverse side of the screen. Words reveal the clues to what is hidden, sketch the outline of the manufactured image to the point that, through them, the present of a locale (the place where the experience occurred) is distilled and becomes visible. At the same time as words speak of the scene’s context, they have a tendency to unmask the machinery of the exhibition. But does that necessarily mean they diminish the illusion? 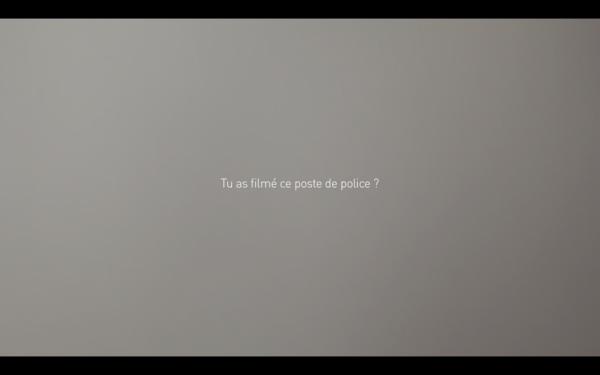 intercessors
Penetrating into the dark architecture of sommeils is like zooming into the ink in Orientations: to go there where the images appear.
sommeils continues the experience of Orientations, by developing in particular the question of the intercessor. As in Orientations, the passer-by becomes the intercessor of the captation device. I’ve just reread our exchange from the FIDMarseille and it is striking to discover the seeds of what became sommeils. With sommeils, there are multiple intercessors who each propose different points of view of the same thing and of the same experience. This element of multiplicity, like the image of multiple windows that is created in the exhibition, is very important and the selection of different dialogues was a difficult process. I opted for those that seemed to me to bring differing, or even contradictory, points of view. As well as those that evoke the experience in question and the camera as object.
I wonder what relationship exists between intercessor and mediator? Do these voices become the mediators of the exhibition?